Hendre Ifan Goch Farm at Glynogwr had a toilet at the bottom of the garden that was flushed from a little stream running underneath, not unusual for farms but this one had 2 seats.

The toilet was in need of some TLC and not having time to do this we asked the National Museum at St Fagans in 2008 if they would like it. 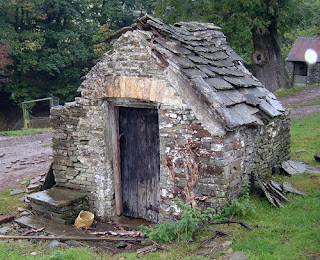 Having received a farmhouse as one of the original pieces in the 1952 from Llangennith in Gower which was rebuilt at St Fagans by 1955, they were donated the cowshed and calf cots in 2007. The outside toilet at the farmstead was a ruin so our toilet fills the place in the corner of the garden of Kenixton Farm.

We were invited to the opening of these new buildings on the 20th of June 2012 and were delighted to see how it had been restored. 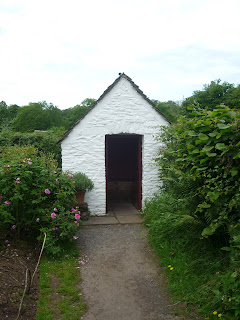 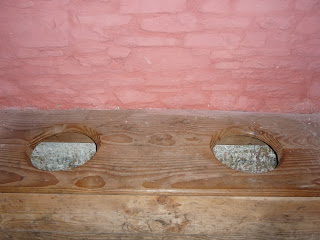 Hendre Ifan Goch Farm was also the home to Lewis Hopkin (1708-1771)the Bard and preacher, his son Hopcyn Bach was a dwarf and his suit also is at St Fagans Museum.

Lewis Hopkin exerted the greatest influence on the literary life of Glamorgan in that period. He was also the bardic teacher of Edward Evan and Iolo Morganwg admits that Hopkin taught him. He was a well-read and cultured man; it is claimed that he was well-acquainted with English literature of the 18th cent.; he had Latin and French books in his library. He was buried at ; Iolo Morganwg published an elegy to him in 1772 under the title of Dagrau yr Awen.

Hopcyn Bach (Hopkin the dwarf), son of Lewis Hopkin, the bard, died aged 17 of senile decay in 1754. He visited in 1751, staying for the winter season, and visiting the nobility and gentry. He was introduced to Princess Dowager of and the Prince of Wales. According to a letter written by John Browning in 1751, he was also shown publicly for money in .
Posted by Our Welsh Farm at 13:39

Our Welsh Farm
This is a blog for the website giving you an insight into rural life and issues if you wish us to visit to demonstrate the site or need access to the site please contact me.